About the Patrol Division

The Patrol Division is the backbone of the Kalispell Police Department, as with any police agency. It consists of one captain, one Lieutenant, six Sergeants, 43 patrol officers and one Administrative Assistant. The division is assisted by three Reserve Officers.

The patrol division provides 24-hour service to the community, working three traditional teams, four days a week (10 hour shifts), 365 days a year. The uniformed men and women who work in our patrol division are dedicated, highly trained professionals who are committed to this community and respond to the 911 calls you make.

They are the first responders who respond to many types of incidents by either being dispatched from the Flathead County 9-1-1 center or by observing situations as they are occurring. Our patrol officers handled over 28,000 calls for service in 2011.

There is no such thing as a “typical” or “routine” day for a patrol officer. These officers handle all types of calls from assisting stranded motorists to investigating serious criminal offenses such as domestic violence, assaults (physical and sexual), robberies or burglaries. This is in addition to their duty of enforcing traffic laws. One minute an officer may be driving around performing “routine patrol duties” and the next minute, these officers may be involved in a life or death situation.

Because of the diverse situations these officers respond to, patrol officers are continually attending on-going training in many different areas and skills sets. They undergo mandatory training throughout their careers to keep their knowledge up-to-date and their skills current. Prior to being allowed to conduct “solo” patrol a rookie officer must successfully complete the department’s 15 week Field Training and Evaluation Program and another 12 weeks at the Montana Law Enforcement Academy in Helena. This is to ensure all officers are comfortable and capable of performing their duties independently, legally and safely.

Patrol officers are assigned to one of four geographical zones during their tour. The goal of this is to decrease response times and increase proactive policing. With the use of Mobile Data Terminals and Computer Aided Dispatch, our officer are more effectively dispersed, but cross into other zones to handle high priority calls or backing up other officers with high-risk situations. Additionally, when weather permits, we have a certified, community-oriented Bicycle Patrol. This encourages more open interaction between officers and the citizens and visitors of the City of Kalispell. 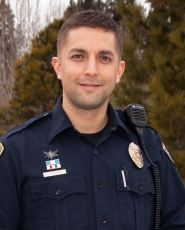